The dogs accepted into the Forever Foster Program are very special pups. Some have chronic health problems which require an unusual amount of care and expense; some are severely disabled; others are elderly or have terminal medical conditions. Euthanasia is not an option for these dogs unless their quality of life is compromised. Instead, their medical expenses are covered by Bichon FurKids while their foster moms and dad provide the physical care and love they need and deserve. 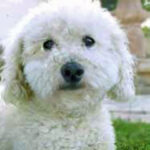 Nico was first adopted in 2012 when he was a pup of about five or six, mellow but full of love and playful curiosity. When his adopters divorced in 2018, Nico was surrendered back to us. 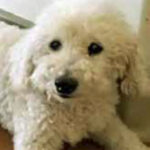 While we hoped he would have received the loving care he so deserved, Nico was in pretty rough shape when he was surrendered in 2018 at the age of about 12. He was losing his vision and hearing but gamely went about life, still filled with a quiet and calm kind of love that extends to his foster Mom and her FurKids In fact Nico seems to be very comforted by the companionship he receives from Gracie, who had also lost her original FurKid ‘brother’. 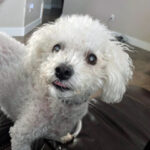 Toby is an 8 year old bichon who is diabetic. His family traveled a lot so he spent a lot of time being boarded at the vet’s office – until it was determined that he needed more attention and a structured environment. Unfortunately that was more than the owners were willing to provide so they relinquished Toby to the San Francisco shelter (which could not provide the ongoing care the little guy needs! 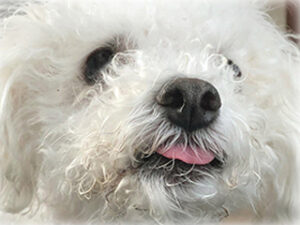 You see Toby requires a special kind of dedication, as he needs to receive insulin shots twice a day, every day, to maintain his health. Toby seems to know that the shots help him and he’s very good about taking them. His foster Mom is devoted to his care and he is a thriving little guy with a FurKid buddy which is also comforting to him. 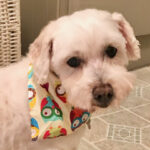 Not to be confused with Toby is Tobey Maguire. He was abandoned by his family, dehydrated, badly in need of a dental and with a mass on his chest. 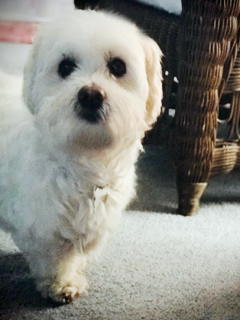 Tobey ‘almost’ set a record for the most teeth removed in a dental (17) but felt a lot better without those awful teeth. Tobey Maguire is 15 and is showing signs of canine dementia. He is lovingly cared for by his amazing foster Mom who has researched homeopathic treatment for his ‘sundowner’s syndrome’ that help him to be more relaxed and less anxious. 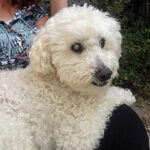 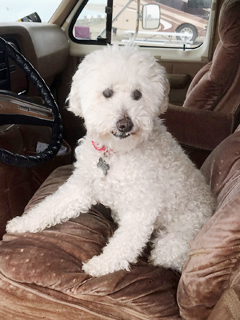 In July 2020, Romeo was found wandering on a busy street in Fallbrook, CA. This was doubly concerning because Romeo is now 15 and blind. His owner had had a stroke earlier in July – and no one had been designated to care for him. His microchip, traced back to Bichon FurKids, enabled us to identify his owner. We called and were given the sad news. We asked about Juliette at that point. The adult daughter had no idea what happened to her or when but thought she had died a few years before. We couldn’t wait to bring Romeo to a loving home. His foster Moms, plus 8 year old sibling FurKids, are making these next chapters of his life loving and safe. He will never be abandoned again! 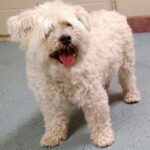 Our most recent Forever Foster is a 13 year old bichon named Addie. His owners relinquished Addie to the Sacramento shelter. He had a cyst that needed to be removed, needed a dental (for his few remaining teeth) and had been over-fed and under-exercised, In short, Addie’s owners showed little concern or affection for this quiet and sad pup. In his forever foster home, Addie has the companionship, when he wants it, of another FurKid, as well as the dedication of a Mom and adult daughter. His days are spent inside, rather than outside- and his personality is starting to blossom with love and trust.

To make a tax deductible donation/entry by check or money order, please mail it to: