Making a Difference in Dog’s Life

Editor’s note: The most wonderful part of rescuing pups is knowing that we can make a difference – and a BIG difference- in their lives. And the greatest reward is when we are able to place them in forever homes with amazing adopters.

Hello Bichon Lovers,
What a year this has (already) been! We hope that you, your loved ones and FurKids are staying safe and healthy. I know we all are looking forward to a far happier, healthier and better 2021!

While patience has been the byword for 2020, it also has its rewards. The Smith family in Oregon found that to be the case as they began their ‘journey’ to add to their family in February and ended up taking a road trip in October to adopt Luna. Read all about their adoption story on pages 1-3.

Growing up with pups is also a very wonderful experience for our kids, grown and otherwise. We love hearing how a pup has made a difference in their lives. Dodger made that kind of difference in the life of Christy. You will find her article also on page 3. And for those of us that want confirmation that having a pet adds more to our lives on so many levels. There’s an article on page 4.

Our 2021 calendars are now available (see page 5), there are ways to help BFK when you shop (see page 6), instructions on making No Sew Blankets (on page 7) and a Bichon-tested and much loved recipe on page 8! 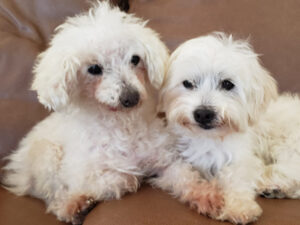 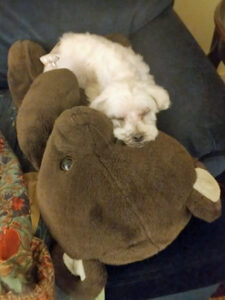 We have had some very happy moments this year with adoptions like Donny and Marie, Demi, Rikki, Fonzie, Billy, Bailey Boy, Cici, Marley, Phoebe, Puccini, Laddie and others —as well as Coco and Tippi most recently. Sporty, Tori and Toni will be looking for their forever homes now too – and we would love for them to be adopted before this year is over. Please look for their bios and photos on our website.

To those of you who donate to us monthly, please KNOW how much your contribution means to us and our FurKids. Your response to our Forever Foster and Matching Donation programs have been humbling to us. Your generosity makes SO much difference for these deserving pups. Quincy is one example of the difference you have made in the life of a lucky FurKid. 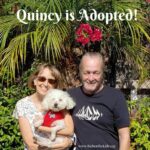 Quincy is happy to let everyone know that he has his forever mom and dad. He has already proven how smart and happy he is– and wants to thank foster families in Northern and South Cal for their loving care– and the kind pilots who flew him too! And check out his winning video as he has mastered the game of Fetch very nicely!

So please sit back and enjoy our newsletter. Click on the link below and read it online — or print it out for reading offline

All the best,
Marti, Judy and the Editorial Team of Bichon FurKids

PS Please like us on FaceBook and follow us on Instagram to be in the ‘know’ about the latest news and updates on our FurKids. And for those of you who make recurring donations to Bichon FurKids, we appreciate your support and promise you it is used only for the care of our FurKids!

Your privacy is important to us. We will not share your information with any other company or organization and you can unsubscribe from our mailing list at any time. Just look for the Unsubscribe link at the bottom of any our our mailings.

Our Newsletters require that you have Acrobat Reader installed. If you do not have it, you can download it for free from http://www.adobe.com/products/acrobat/readstep2.html